Sunday was a wonderful day at First Baptist Church in Harrison, Ohio. We had a good attendance (even with several of our own members away), and some visitors came to make for a good fellowship together. The message on "Saved By Grace" sounded out to everyone there, and prayer is that someone was touched or challenged by it.

Sunday afternoon at 1:30 First Baptist Church had a second service. Many members were with family and did not come, but those of us who attended were blessed. The message on "The Ark Of The Covenant" was meant to challenge each one of us to realize that without the law of God there would be no grace of God. The law of God rested within this ark (box) of the covenant, and it reminded Israel that the law is always nearby God himself. That law must be kept, and we as sinners are not able or worthy through the law, but Christ kept the law for us and suffered and died on the cross to both reconcile us and be our propitiation (satisfaction) to God, doing that which was right, honorable, and worthy to God.

Through God's grace Christ's righteousness is imputed to us through faith in Jesus as our Savior. Now we are brought into a good position and fellowship with God. With a new birth, we honor God through our good works, which are wrought of God (Philippians 2:12-13).

Christmas day was a day at home with little to do, but I am always busy doing something. I invited my grandson, Eric Wolfe, to come to the house to help me in taking some pictures of myself. He is a good photographer. After he took a few pictures of me, then I took a few of him. We both selected one to be our "official" picture for 2018. Eric stayed nearly the rest of the day. I think he left around 9:00 PM.

Today is the day after Christmas, and I am here in the office deciding (after I write this blog) which article of work has first priority. I suppose I will work on my message for Wednesday evening. I have already read several chapters in the Bible this morning, so that is done; but I will, I am sure, be gazing into them again and again throughout today.

I am thinking about New Years resolutions, but I cannot think of anything that I have not already resolved and then broken; so maybe I will not make any resolutions except perhaps to try to do better in everything that I do and to grow in the grace and knowledge of our Lord and Savior, Jesus Christ (2 Peter 3:18.

Have a good, wonderful, prosperous day that glorifies the name of God and his Son, Jesus, and the Holy Spirit.
Posted by Dr. Ron Wolfe at 8:04 AM No comments: 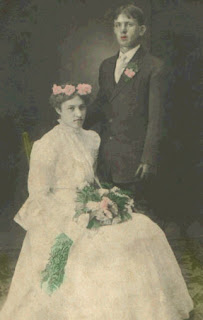 Burnie (Bernie) Wolfe was born July 26, 1890. He died August 15, 1951. His wife's name was Myrtle (Sorrell) Wolfe. This is their wedding picture. I do not have a date for their wedding or of Myrtle's birth and death. 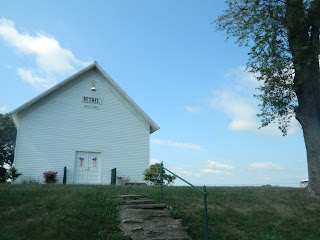 They were married at Bethel Church in Pendleton County, Kentucky. This building is no longer standing due to a storm that came through and demolished it. I am happy to have this picture. There is an interesting story behind that church.

Burnie Wolfe was not only married at this church, but he also preached at this church at times. My cousin told me that her parents and some others of the family went there to hear Burnie preach when she was just a small girl. Someone told me that Burnie was known as "the crying preacher." He was a Baptist preacher. 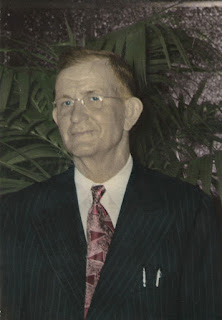 Burnie Wolfe pastored several churches, including Turner Ridge Baptist Church in Pendleton County, Kentucky. He was pastoring Wood Mission in Latonia, Kentucky, when, at the age of 65, he suffered a heart attack and died. Burnie Wolfe was my father's oldest brother, son of Ben A. Wolfe and Pheba (Larkin) Wolfe. 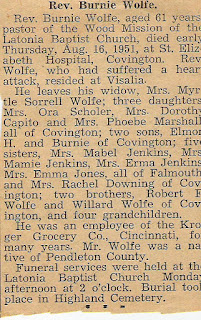 This is Burnie Wolfe's obituary, which was printed in the newspaper. 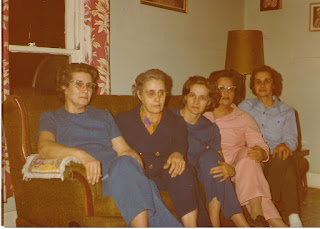 These ladies are five sisters. They are my mother and four of her siblings. My mother is the small lady on the right side of the picture near the wall.

The ladies are (from left to right):  Ann, Emma, Frances, Dorothy, and Lola (my mother). Their maiden name is Blackburn, children of Frank Blackburn and Ona (Wells) Blackburn. All of these sisters are now gone from us.

There is another sister, Lucille, who now lives in North Carolina. We do not see her much. I have a young picture of her.

The picture to the left is one of Frances and Lucille, which was taken when Lucille came to visit her family. The picture below this one is a picture of Lucille in her younger years. 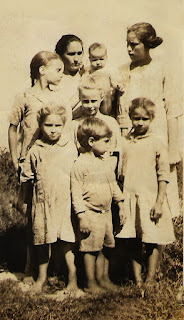 To the right you can see a picture of Jesse Mae in her mother's arms and some of the other children. Besides Jesse Mae, there is Emma, Virginia, Lola, Ann, and James (in front).

Later were born Allen, Dorothy, Lucille, Frances, Elsie Jewel, and Donald -- 12 in all.

They are all gone now, I think, except Lucille.

I knew most of them well, and we had some good times together. Several of them would come to our house during holidays and eat with us, and James would usually stay a few days with us, since he was not married. We always enjoyed their visits and especially James' wittiness and willingness to do almost anything. 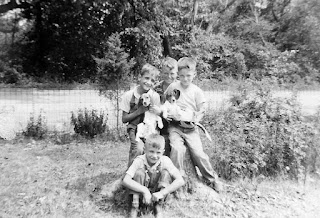 The year was (about) 1952. It was the year my grandfather, Frank Blackburn, died. I think he was 79 years old. He lived with us and was not well. He mostly stayed in a back room in our house. He felt bad most of the time, so we children did not get to know him well. He was my mother's father. I did not know his wife, my grandmother, who was Ona (Wells) Blackburn. She died before I was born.

We lived on the Earl Wallace property. My parents rented the farm and did work for Mr. Wallace to help pay the rent. There are many stories in my head in regard to this place. Today I noticed the picture above and tried to remember on what occasion my cousins were at our house, but I cannot remember. I do, however, remember my mother's taking this picture.

I am sitting on the ground in front in this picture, and the boys behind me are (left to right):  my brother, Eddie Wolfe, my cousin, Dawson Jones, and my other cousin, Rodney Reel. I wish I could remember more about the activities of this day, but I cannot. I am persuaded, though, that we had a good time together, because we always did.

The property is on the Morgan-Marcus road. Many who live in Pendleton County, Kentucky, know the property well.

Below you can see a couple more pictures from that property. My father worked in that tobacco patch, and it grew to be much higher than his head.

The bottom picture is what is left of the house. A 50-cent piece lies under the front room floor, the one that I dropped through a knothole when we lived there. I hope sometime someone will find it and give it to me. That would be wonderful, though not of much real value. I am indebted to my friend, Benny Brown, for this picture of the house. 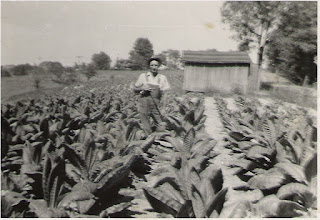 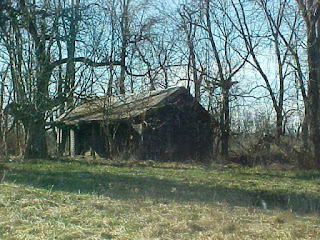 Tonight, 12/6/2017, Lord willing, I will be preaching on The Table of Shewbread from the books of Exodus and Leviticus. The Table is a showpiece, which reveals both Christ and ourselves to God. It is a manifestation of Christ's work for his people and also a manifestation of our work of Christ.

We are fed by the bread from Heaven, which is Christ, the antitype of the bread on the Table of Shewbread. Read John 10.

The acacia wood, from which the table is made, is a reminder to us of the endurance and even the eternality of Jesus Christ. He cannot be corrupted, neither was any sin in him. This wood, I understand, grew where other woods would not grow, and the wood also had thorns, which typifies the sufferings of Christ and even our own persecutions in this life as we live for him.

The bread, being 12 loaves, represents all the tribes of Israel, as they represent the apple of God's eye as he watches over them, sees their works, chastens them, and forgives them. He loves his children with an everlasting love.

The wine on the table was not drunk by the priests, for it was forbidden them to drink wine there. It is understood by some that the wine was poured at the foot of the Table of Shewbread.

New bread was placed on the table each day, which typifies our being given fresh mercies and supplies of grace every day as we live for the Lord.